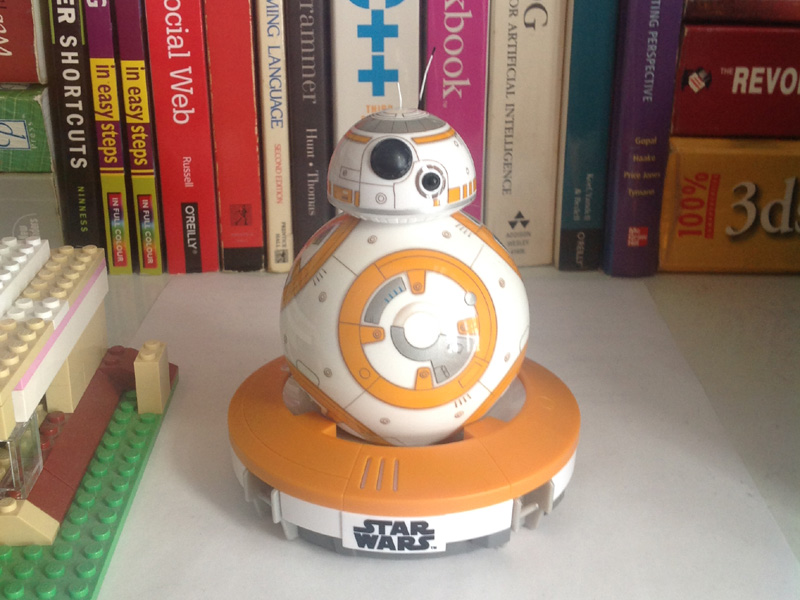 The sphero app-enabled, Tickle-programmable droid: BB-8, the coolest toy ever?

This has got to be one of the coolest toys ever. When I was a kid, there wasn’t even a possibility of receiving such a thing under the Christmas tree…the times they are a changing!

After un-boxing our new BB-8 droid, I was pleased to note that there was zero configuration or assembly required. I simply popped him out of his box, set him down by the nearest cat, and let the fun begin! Driving using the iOS / Android app was a bit confusing at first, but only took a little getting used to. The blue-light orientation wasn’t in fact necessary per-se, as BB-8’s head actually faces his “front” when you adjust his orientation.

If you were to ask me though, the “real” fun began when we tried out the “Tickle” app interface for programming BB-8 – “Tickle” as in not “Scratch”, that is. This is a visual block style programming interface which has been adapted to work with the underlying interface to sphero’s robots. In fact, next up, to go deeper, there is already a community-built Javascript API available from sphero!

As well, there is a cool initiative started by some pretty awesome builders: The BB-8 builders club. Its a community-based, open-source type collaborative initiative intended to help those who aspire to build a 1:1 BB-8 of their own!

Just getting started with BB-8, but will post as things progress I hope. In the meantime, may the hacker-bug be with you!