Recent travels have brought me to the door marked “None Shall Pass!”. 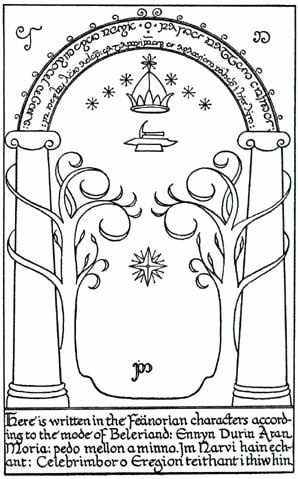 I love those doors.

They always make me think of Gandalf, sitting in front of the sealed entrance to The Mines of Moria, trying to stay calm while he searched his memory for the pass-phrase that would gain the fellowship the badly needed entry, into what, un-beknownst to Gandalf, would become the most difficult battle of his career up to that point in his long, storied history.  Of course, it did not kill him (the unforeseen battle), and it made him stronger, so, it was not all bad after all. At the time though, as he sat there, searching his memory, I imagine him being frustrated in a bemused kind of way, because he knew this contraption was a simple device which did a simple job, albeit very effectively. All that was required was that the correct words be spoken, and voila! Door open. He knew the phrase could not be something he didn’t already know, or at least something he couldn’t figure out, but the frustration was, not knowing how long it would take until he had passed the darn thing, and if it would take so long, that it would jeopardize the mission.

Believe it or not, Google Places seems like this to me right now…wherein user reviews for a location are concerned. Since the latest changes to the public API some very useful and powerful features have been added, allowing developers to do a lot more, more easily. It also seems though, they are tempting developers who depend on aggregating web-based information, even daring them, to embark upon a host of splintered, individual development efforts into the nether-regions of trying to catch up with what Google has done this time! If you are a developer who has anything at all to do with using the information that can be harvested from a Google+ page, then you already know what I’m talking about. Oh sure, they have graciously extended a helping hand with a little more topsoil from their rich strata of information for the rest of us to consume, that is cool, to be sure. However, they have also done something which I find a wee-bit silly. Silly, because it seems like a counter-productive move on their part, if anything; they have limited the number of reviews available for a given location, via the API to five. Yep, five. Which five you ask? Well, the only five, if five is all your location has, otherwise…it is Google’s choice, not yours.

Here’s a recent post about this issue that may shed some light:

Are you a developer trying to make good, constructive use of Google Plus location information, in particular the user generated reviews?  Have you perhaps found your own way around only getting the top five? If so, I’d love to hear from you, and hear what you think about this standing challenge that NONE SHALL PASS!